"The upper portion of this section, like that last described, consists chiefly of well-watered vale; and herein - as was to be expected - no traces of Early British occupation are to be found."

Square 8:
a. Where 'Marsh Lane' crosses the little stream flowing from the Panhill Spring at Cherhill, was found the upper portion of the skull, with the horn-cores attached, of the "primaeval ox" (Bos longifrons, or Bos brachyceros). It was discovered in about 1835, in the gravel bed which the stream flowed through. Given to the Museum of the Wiltshire Archaeological Society in Devizes.

Square 9:
a. Bowl-shaped, low, rather wide barrow, Opened at the top but no record of the opening.
b. Earthworks - banks and ditches - of a peculiar shape.
c. More earthworks of the same character.
d. Almost obliterated by the chalk diggers, may be seen the traces of an oblong barrow of considerable size. In 1864 workmen found three skeletons lying with their heads to the east, in a large shallow grave surmounted by small blocks of sarsen stone. William Cunnington later investigated and found "an abundance of rude pottery and flint-flakes". The episode was reported in WAM, Vol xiii, pp. 103, 104.

Square 10:
a. The Wansdyke and Roman road merged into one. The Wansdyke, after tracing a meandering route westward, suddenly runs straight. Despite much searching, Smith was unable to find any trace of the Wansdyke after its junction with the Roman road on Calstone Hill. He concluded that "some pre-existing British trackway" had been somehow been appropriated by the Romans, to save labour in building their own road.(Note: Smith was wrong: the Wansdyke is now known to date from the 5th or 6th century.)

Square 11:
a. Junction of Wansdyke and Roman road.
b. Wansdyke.
c. Roman road, seen here in its own proper character.
d. Very regularly-formed deep depression, possibly a 'pond barrow'.
e. Large and high bowl-shaped barrow, close to Wansdyke. The top has been opened and much cut away. Thurnam did the damage: his report is in WAM, Vol vi, p. 318, No 3.
f. Broken ground on both sides of Wansdyke, possibly from modern stone-digging.
g. Double dyke running down the hill towards Wansdyke.
h. Very low barrow with no visible marks of opening. Possibly dug by Thurnam and described in WAM, Vol vi, p. 319, No 5. 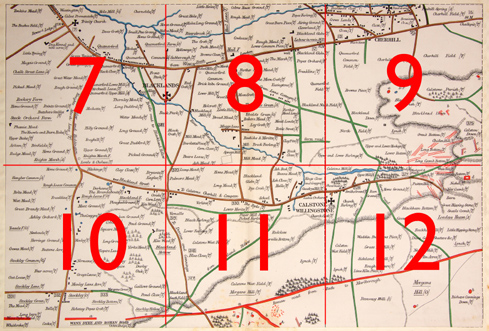