Square 61:
a. Stone circle mentioned by Stukeley. AC Smith dug up a ring of 22 small sarsen stones in 1877; they formed an ellipse.
b. Very large bowl-shaped barrow with ditch, opened and much cut away.
c. Large ditch and bank.
d. Large and wide barrow, no ditch. Possibly one opened by Merewether, who found "nothing worthy of particular notice".
e. Bowl-shaped barrow, no ditch; apparently opened.

Square 62:
a. East Kennet long barrow, covered with trees.
b. Very wide, low barrow, almost ploughed out.
c. Another very wide, low barrow, almost ploughed out.
d. The Ridgeway.
e. In 1882 AC Smith was called to Lerkely Hill, to see a large sarsen being removed from just below the surface of a field, where it was hindering the plough. Stone-cutters engaged to break the stone removed the soil, exposing the stone, estimated to weigh 7 tons. It was found to be lying on an oblong wall of massive sarsens, each weighing from 1 to 6 cwt; between the stones were closely-packed wedges of flint and stone. After many days of breaking up the stones, another huge sarsen was found occupying the bottom of the pit. It was removed, exposing a deep hole dug into the chalk and filled with very wet and heavy red clay, mixed with soil and flints that were perfectly black. The oblong pit measured 5ft 6" by 4ft 4" and was 12ft 4" deep; its chalk sides appeared to be plastered with a thin coat of different red clay. The whole pit was saturated with water, down to the chalk bottom. Smith thought it may have been a tomb, but its dampness had rotted away any bones or ashes. 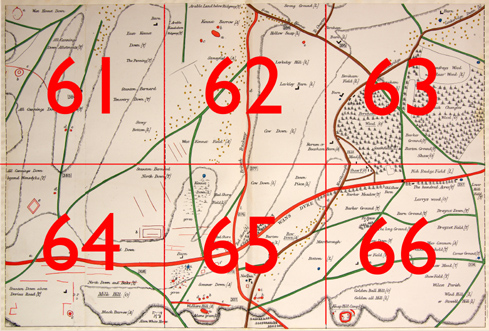