Square 13:
a. Bowl-shaped moderate-sized barrow, no ditch. Opened at the top.
b. Small, low, bowl-shaped barrow; apparently never opened.
c. Oblong low barrow, running to great length; not opened.
d. Grass bank and ditch, running from the brow of the hill down to the old Bath road.

Square 14:
a. Again we come to Wansdyke.
b. Large and high bowl-shaped barrow, opened at top.
c. Large bowl-shaped barrow, opened at top.
d. Broken ground all over the highest parts of the hill. The deep hollows and wide pits were believed by Smith to be the remains of ancient British "pit-dwellings".
e. Large square earthwork, enclosed with ditches and banks. Perhaps a camp, or cattle-pen.
f. Large, wide, low barrow, not readily seen. Opened by Thurnam, who found a cremation, "two beautifully barbed arrow-heads." and a flint dagger. His account is in WAM, Vol vi, p. 319, No 4.
g. Very low barrow, easily missed; surrounded with holes, apparently pit-dwellings. Not opened.
h. Earthworks, possibly some kind of military defence.

Square 15:
a. From here, the Wansdyke can be seen at its finest.
b. Small bowl-shaped barrow, with tump on the top; opened.
c. Large bowl-shaped barrow, opened by Thurnam, who found an unusual skeleton of a man six feet tall and about seventy years of age. Described in Crania Britannica Vol ii, p 32. Further discussion in WAM Vol vi, p. 318. No 2.
d. Large square enclosure, surrounded with bank and ditch, the bank on the inside. Described by Stukeley as a 'Druid House' in Abury Described, p. 48.
e. Small circular barrow, indistinct.
f. Very small barrow, close by the last; not opened. It may be doubted whether these last two circular mounds are barrows.
g. Ditch hard by the barrows mentioned above, running south to Wansdyke.
h. Another small barrow, vaguely defined.
i. Low bowl-shaped barrow, easily passed over but certainly a barrow; unopened.
k. Pits thought by Smith to be hut dwellings.
l. Deep hollow, probably a pond barrow. "Well-formed twenty years ago but now much mutilated."
m. Disc-shaped barrow. In 1860 it was "one of the most beautiful examples of its kind in Wiltshire, very small, circular, surrounded by a double ditch. Now completely destroyed by flint diggers."
n. Small bowl-shaped barrow, apparently opened on top. "Now much mutilated."
o. Very tall and large bell-shaped barrow. Opened by Sir Richard Hoare in 1814, who found no signs of a burial. Described in Ancient Wilts, North, p. 92
p. Small bowl-shaped barrow, between two larger ones. In 1804 Cunnington found a cremation and a jet ornament.
q. Large and high bowl-shaped barrow, opened at top.
r. Large, wide, low, and somewhat flat barrow; apparently never opened.
s. Quite large bowl-shaped barrow, opened at top by Thurnam in 1855. He found burnt bones and nothing else.
t. Bank and ditch connecting o, p and q, then running northwards.

Square 16:
a. Oliver's Castle.
b. Barrow of irregular shape - if a barrow at all, which is somewhat doubtful.
c. Small, rather low, bowl-shaped barrow with a ditch round it, opened at top. This is the famous Anglo-Saxon barrow opened in 1840. A skeleton was found, formerly enclosed in a wood cist, bound around and clamped with iron plates or hoops. Also found were gold ornaments and a pail, ornamented with brass. Reported in WAM, Vol. vi, pp. 164-166.
d. Low, somewhat flat, bowl-shaped barrow, a faint ditch round it, opened at the top.
e. Probably a barrow, covered with trees; antiquity uncertain.
f. Another doubtful barrow.
g. Long, irregular-shaped, much-mutilated barrow, of very large dimensions, now much misshapen. It is no. 6 in Cunnington's account of the barrows on Roundway Hill, reported in WAM, Vol. vi, pp. 162-164.
h. Ditch and bank with every appearance of antiquity.
i. An extremely low barrow, best seen when the sun is setting. No. 1 in Cunnington's map (ref. as h. above).
k. Small and very low barrow, No. 4 on Cunnington's map (as above).

Square 17:
a. Bowl-shaped barrow, surrounded by broken ground, probably from flint-digging. No. 5 on Cunnington's plan (see Square 16, g, h, I, k). Opened by Thurnam but without result.
b. Small bowl-shaped barrow with no ditch. Opened in 1805 by Hoare and Cunnington; finds included a skeleton and 30 bits of ivory, like marbles, with bits of decayed wood. Opened again in 1855 by Thurnam. No. 3 on Cunnington's plan (above).
c. Though low and scarcely perceptible, unquestionably a barrow.
d. Banks and ditches forming a large parallelogram.
e. Barrow, almost obliterated, examined and described by Cunnington in 1855. No. 2 in Cunnington's account (above). Many artifacts found, with the skeleton of a man described by Thurnam as "the most aged specimen" ever found - 70 to 80 years old.

Square 18:
a. Very large wide-spreading barrow, now fast disappearing under the plough but well-known to the ploughmen on the farm as "the barrow".

d. Very small circle, or rather oblong with rounded corners, enclosed with bank and ditch.

Square 23:
a. Much-destroyed earthwork with green banks; past deciphering.
b. Another earthwork, square, deep, pond-like, with the corners cut away. 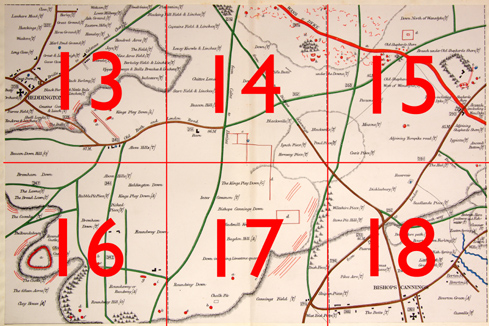