Square 20:
a. Large grass mound, plainly artificial, but uncertain what it may be. Does not look like a barrow.
b. Another huge grass mound, also artificial; doubtful what its intent may have been.
c. Below the hill there are several extended banks and ditches.
d. Large mound, surrounded by a very deep ditch or moat, with much broken ground around it. A windmill once stood here, perhaps sited on a pre-existing mound.

Square 21:
a. Winterbourne Bassett: site of a double-concentric stone circle, described by Stukeley. In 1881 and 1882 AC Smith spent considerable time and effort excavating and mapping stones buried in this field and was convinced he had found the stone circle. Smith was mistaken: this is a natural drift of sarsens and many more are still buried. The actual site is in a field some 190m to the field.

Square 23:
a. Much-destroyed earthwork with green banks; past deciphering.
b. Another earthwork, square, deep, pond-like, with the corners cut away.b. Buried from sight, but not far from the surface, large sarsens occasionally caught the ploughshare, so each stone was hauled out of the field using a team of horses. They were found to covering stones of graves: nine were opened in 1854. 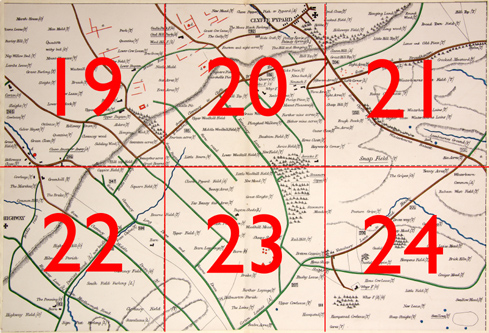