Square 50:
a. Circular tumulus, probably a barrow. Merewether examined it in 1849; in the side he found teeth of deer, oxen and bones, charred wood and a small sarsen "partially rubbed." Reported in "Proceedings of Archaeological Institute, Salisbury volume", p. 104, No. 24.
b. Long low tumulus, believed a barrow. Merewether found part of an ox skull and fragments of horn from deer and oxen. About a foot from the surface was the skull of a greyhound with a Roman ampulla; below was a sarsen stone. (ref as above, No. 26)
c. A circular tumulus similar to a. Merewether found similar remains, also a sarsen 3" in diameter, rubbed down to a cylindrical form, and the front teeth of an ox. (ref as above, No. 25)
d. Small bowl-shaped barrow, no ditch, opened at top.
e. Very low bowl-shaped barrow with ditch and a sarsen on the top; possibly Merewether's No. 28. Merewether described lifting 3 sarsens on the top of a mound; beneath were fragments of an urn, containing the skull bones of a very young person. Near the top was a sarsen, rounded and about 2" in diameter. The barrow was made of very coarse chalk rubble, with no bones or pottery. Five feet down were the skulls of 2 oxen side by side; both had holes from pole-axing. Five feet below these and ten feet from the top, was a crouched adult skeleton, with an urn and a few worked flints. Reported in "Proceedings of Archaeological Institute, Salisbury volume", p. 105, No. 28.
f. Circular depression like a shallow basin, with bank and ditch, possibly a disc-shaped barrow. Merewether described four large sarsens in the centre; beneath them were ox and deer bones and teeth, more large sarsens and boar's tusks. (ref as above, pp. 103, 104, No. 27)
g. Holes and pits, probably the marks of British dwellings.
h. Bank and ditch, apparently old.
i. Moderate-sized bowl-shaped barrow, opened at top.
k. Low bowl-shaped barrow without ditch, opened at top.
l. Low bowl-shaped barrow without ditch, opened at top.
m. Very low, flat, bowl-shaped barrow without ditch, opened by a trench cut through the middle.
n. Large high bowl-shaped barrow, no ditch. Large hole in the top.
o. Low bowl-shaped barrow, no ditch, large hole in top. Merewether found sarsens inside, with an urn containing burnt human bones. (ref as above, p. 107, No. 31)
p. Here we have the "watershed" of the sarsen stones, whence they stream off into the various valleys.
q. The Ridgeway.

Square 51:
a. "Somewhere in this immediate locality, though I have failed to find it", was 'Old Chapel' as described by Stukeley - a large square enclosure set with large sarsens.
b. Low indistinct bowl-shaped barrow, much cut away and defaced; no ditch.
c. Very low and wide-spreading barrow, not opened.
d. Bowl-shaped barrow, opened at top.
e. Bowl-shaped barrow, opened at top.
f. Deep pit, surrounded with banks, now half filled with sarsens. Probably once a pond barrow.
g. Small faintly-marked enclosure on the brow of the hill, bounded by bank and ditch, with a row of 25 half-buried sarsen stones.
h. Small, very low, bowl-shaped barrow, not opened.
i. Many earthworks - banks and ditches.

e. Three large sarsen stones that seem to mark some burial or monument. 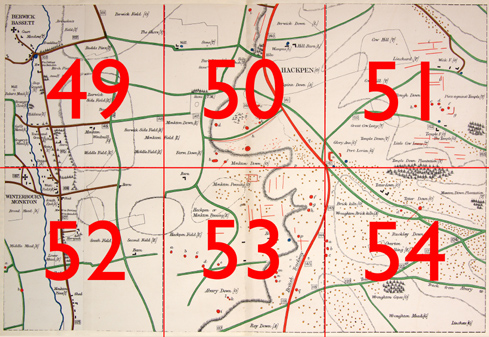